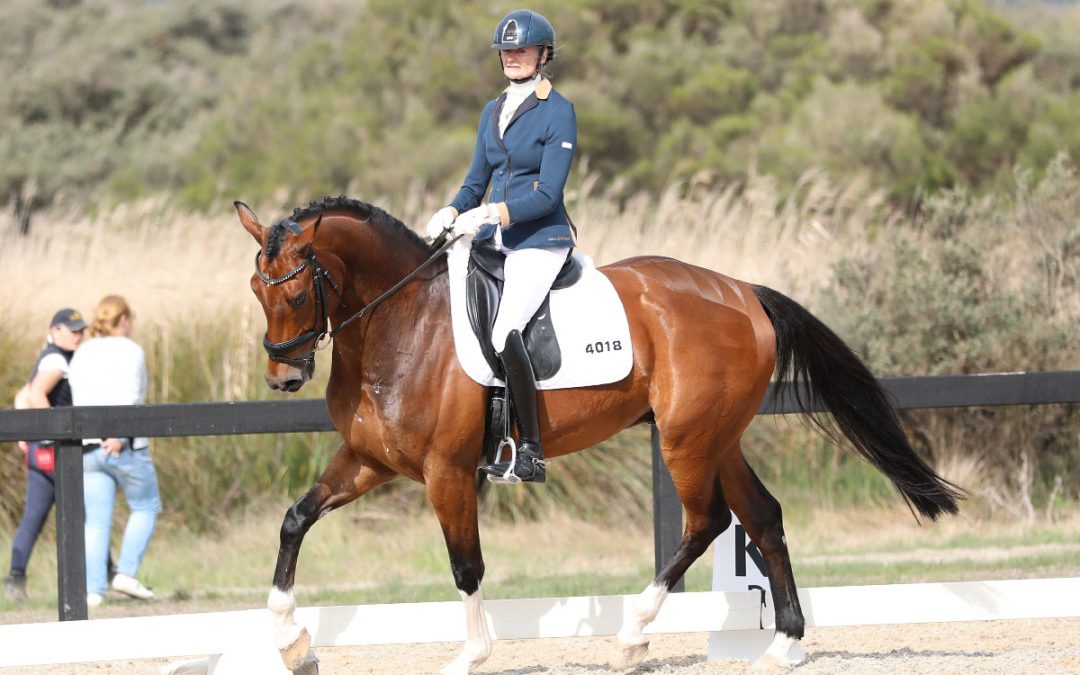 Sylvia Mclachlan is one very special and fabulous character and competitive lady of the sport. Funny, sharp, witty, elegant and a great horsewoman and not at all embarrassed to tell you she was born in 1950. Perhaps she may be the oldest competitor at the show but if you want a laugh, if you want to talk about any subject there is no doubt that she will be captivating. Sylvia is a very special person and is continuing to have a ball with her amazing life and above all with her riding and look out the elementary class so make way as she is coming through. One thing for sure the saying you cant put an old experienced and wise head on young shoulders and for sure beware as this gives Sylvia the upper hand ( so long as she can remember the test lol). She has a wonderful imported horse Florino 48 by Franciskus x Florestan and is in the elementary class.

Sylvia was born in Dunkeld in beautiful country at the foot of the Grampians in Victoria. She had two sisters and a brother and her father always involved in horses and Sylvia remembers or remembers being told that she was on a lead rein riding around the cattle with her father for hours from the age of three!  She was a member of the Western Districts pony club and won many and eventing competition, fearless and determined.

On finishing school she married Angus, who was a first class cricketer in great Britain and at the same time was studying at Uni there. A talented sportsman and he came back to Australia and took over the fabulous property at Mt Pleasant in the Adelaide Hills as a pastoralist. Rosebank was amazing to say the least. Great paddocks and a merino stud. Indoor arena and magnificent two-story homestead with great gardens and Sylvia the ultimate gardener and the veggie garden and the huge open spaces and the fabulous ambience could tell a many historical story form the great dinner parties. Sylvia and Gus had four sons. Hamish who is a sports commentator of great note. Gillon who is the CEO of AFL. Banjo who is a barrister and then there is Will the youngest is now looking after the Rosebank property.  The property was renowned for the polo factor and Gus started to play polo from Sylvia’s brothers’ involvement. The whole family played polo and with mares’ form Sylvia’s father she started a polo pony breeding programme and managed to take on some of the taller ones and produced some amazing horses that were very successful in dressage. Not to forget that the others were great polo ponies and as of this day Gillon and Hamish play top goal polo and also have played internationally and of course Sylvia loves the game and is always so keen and interested in all her sons pursuits and again the swag of grandchildren that frequent Brickmakers, her new property  with Sylvia in tow around the property and the indoor arena with the sons heckling everyone on from the side. It’s quite the family and truly sensational to say the least.

Sylvia also showed hacks after her first son was born as she felt is was easier. The best one was Cob and Co a black gelding that was raced by the Cobcroft family. Sylvia was second in the Garyowen and won the Esquire Turnout class at Melbourne Royal show. Sylvia with her unmistakable slender- fit stature of elegance on a horse was Champion lady rider and all the east coast royal shows and then went on to judge at every Royal show. Sylvia took a shine to dressage and took Cob and Co to FEI and easily taking to the arena as a duck to water.

Along the way Sylvia trained and organised international clinics with the likes of Christopher Bartle, Malcolm Barns and the Aussie Equestrian icon Vince Corvi to mention but a few.

Times have changed and now Sylvia has moved to the fabulous property of 400 acres near the cape Otway ranges in Victoria. Brickmakers is a property that Sylvia has redeveloped from a run down property that her sons told her she was crazy to start but now think its amazing.

Sylvia is seen at all the right places and a can charm the best of them. Her stories of life in the equestrian pursuits are historical and hysterical. She has recently bitten the bullet of dressage and imported two fantastic horses in Valencia B and Florino 48 the wonderfully put together and moving bay gelding that she will have at the championships. Sylvia is on the high performance squad of Victoria.

Sylvia is modest and down to earth but be warned she means business and is not up at the nationals from Victoria for fun and make sure you guys check her out. You won’t miss her… She is the tallest and fittest female and with legs thin and elegant as a thoroughbred up to her armpits. Immaculate in her dress and with a wry smile that is humble but underneath steely and determined. Sylvia is simply an inspiration to everyone and proof that sport of dressage is not only for the young ones. Go check her out! You will be blown away and don’t t think that Sylvia will just arrive and step on board. Sylvia does it all and loves to get good help from the best around and has had many FEI horses that she has produced all from prelim. She will be the one with the shiniest boots and that look at me quality that she doesn’t think she has, she just does!  Sylvia is no newcomer to the nationals and has had Avignon, Mayfly and Cartier to the FEI ranks to mention a few. With a new hip and recently recovering from yet another fall and several broken ribs her family keeps her absolutely on her toes and she is no quitter.

Keep your eyes out you will also be inspired so step up and have a go! Sylvia is certainly not one of those prissy little things she is the real dinky di deal.

We wish her good luck and don’t worry she will stand out and be happy and modest with whatever their placing.