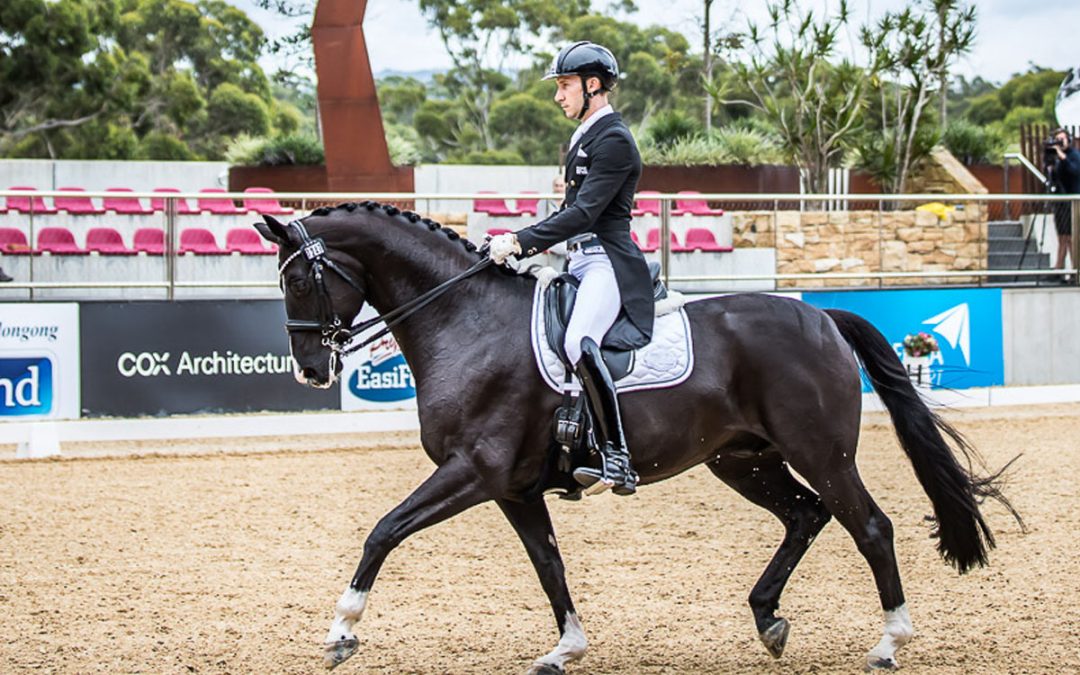 Jayden Brown is quite the consummate competitor and as it is with all top athletes, there is something that sets them apart from the good riders to the excellent ones. Jayden has a burning desire to be the best he can be yet is quiet natured and patient. He has a fabulous position on a horse and lets life and its rewards come to him. He has a great mind for the sport and that mindset is not so complicated.

Jayden was born in Brisbane and has three sisters. He started riding when he was about six and on asking him why he took such an interest in dressage in the end.  He replied “well I was crap at jumping and had only one other opportunity and that was dressage. I loved the mindset and mental approach also that goes with it”. Jayden never really looked back.

When he left school he continued to ride from the family property and produced some very competitive horses and won the right to represent the Pacific league at the young rider World Cup in Frankfurt, where he took his Weltmeyer X Rocadero gelding Widely and despite a spooky first test they won the second test with a score over 70%. This horse was bought as a very quirky individual. Jayden really set up a great rapport with him as quirky as he was, he realised his talent and amazing trainability and within six months he took him for Preliminary to Prix St George. He was a seriously intelligent horse. Jayden took the opportunity to sell him over there and returned to Australia. It was not long before he went back to the young horse World Championships at Verden with San Andreas who earnt the right to compete at the worlds after winning the 6-year-old young horse at the Sydney CDI.  They did incredibly well and finished 13 in the big final on 8.6 (the score Jayden said very quietly but that’s quite a score!) San Andreas was subsequently sold, as was always the intention, and Jayden spent the next twelve months training there with Leonie Brummell and what an experience that was for them.  A great time and learning period.

He then bought the young horse Furst Friedrich a beautiful chestnut gelding by Fuerst Piccolo X Apart  with lots of bling and appeal and he then brought the gelding back to Australia and continued the path to Grand Prix and did so successfully.  Again he was sold to aid Jayden’s continued passion and thirst to get better and train more. Through friends, Jayden met up with Emma Blundell from the very famous and fancy Mount St John stables. They met when Charlotte Dujardin and Carl Hester were in Australia for Equitana. On keeping in touch with them at Mt St John, Jayden applied for a job there and was successful. He worked there for an amazing year and then when back in Australia at home in Brisbane, trying to sort out his visa, was offered several good horses to train. The visa process and the lack of being able to be self-employed on that visa was not as appealing as getting good horses to train amongst friends and Aussie culture, so he decided to stay and he has never looked back.

He still trains his and his owners horses out of his parent’s property in Brisbane and he has some amazing horses to ride and train. Of course, with success and good riding comes good horses to be offered to train. Along with good horse come success and so the wheel of life turns. This is not good luck at all, it’s good management and dedication and learning. Jayden is a modest character who takes time with every one of his rides and this year at the Nationals he is bringing six horses.

On asking Jayden about what he took away from his time at Mt St John he replied:

“I worked there only with mares. I learnt a lot about patience and understanding as they were all mares and being a huge breeding establishment, I learnt about waiting and taking your time and realising that at the same time the mares were under some stress with their bodies doing breeding duties at the same time. When you were training and competing with them, it was patience and lowering your expectations at times that won out. I really learnt a whole new level of patience and perception and as it happens now my barn is almost totally mares by luck not management.  For sure you need to be very tolerant and understanding when it comes to mares and I so love to work with them and work WITH them you have to do or look out you won’t get anywhere.

I have had some fantastic horses and of course the horses from Lauren George have been the most fantastic. I am so happy to have the team back with me now but of Quincy who has been sold to Terry Snow and is in training with Brett Parbery. It was sad to say goodbye to Quincy but I know that some horses have to be sold on to keep the wheels turning and our loss may be someone else gain and I am so happy to see Quincy in such great care. I have two of Lauren Georges horses at the nationals in Da Vinci in the small tour and Bertone in the medium classes. They are both great horses but it is the Nationals and there are many good combinations so I will have to stay very focused and no mistakes as any mistake in these classes is going to be costly.

I was not able to ride them for about six weeks and so that has been a bit of a setback, but they are in great shape and I am so looking forward to seeing if I can do them and the owners justice at this prestigious competition. Davinci has done really well at all his competitions at small tour and is always in the mid 70% range and what a stunning correct black gelding he is. Bertone is by Beniccio X Falstrebo. Bertone is a very wonderful chestnut import and what a fancy impressive gelding he is as well. Jayden rides with plenty of forward desire and the horses show great athleticism and ease. They show confidence and always look to be giving it there all. They are really on show and don’t they know this, and Jayden is such a still and empathetic rider making it look easy and that’s what it’s all about. He is a must to watch but don’t think for a minute that he is going to relax as his horses are some of the highest percentage performed horses at the show. Jayden is the first to admit there are plenty breathing down his neck and a mistake here or there will change the placings dramatically.

I also have Esteem in the novice a mare by Prestige, Donna Carmena by Don Index X Carbine Both super horses and Aussie bred and that great. Another mare Gartina in the medium with Bertone and she is by Bordeaux X Rousseau a Dutch import, Lyon by Livadon and imported young horse is on the reserve list but will appreciate the experience whether he competes or not.

Jayden is the quiet achiever. Polite and modest and unassuming and rides with empathy and feel yet expects the respect he gives in return. It is always a two-way street and this is a rider well worth time to study. He will be out there giving it his dedicated all and will accept whatever comes his way. Jayden accepts the reality that there are many good riders at this competition, and he will need to be totally focused and with six horses that is not an easy task. To not be distracted won’t be easy, but where there’s a will there’s a way and for sure Jayden has the will and he hopes the way will follow.

Whatever happens will happen and horses are horses but I feel my preparation has been good despite the short break when Bertone and DaVinci and Lyon were in limbo, but its so wonderful to have them back and actually a break did not do them any harm as they came back ready to work.  I love to ride them – I am a lucky guy.  I know these two well and we will be out there giving it our best shot and I hope the best ones win and credit to all who compete as I know how much work we put in so it’s going to be great competition. The others in the team are also super horses and I hope I can also do them justice for them and of course their owners but the competition is so strong it’s going to be interesting. I will just stay focused on each individual and ride them to the best I can and then see what the judges think. It’s a great show and I am excited to be a part of these championships and the ever-expanding sport here in Australia.