Showcase of Riders at the 2019 Australian Dressage Championships 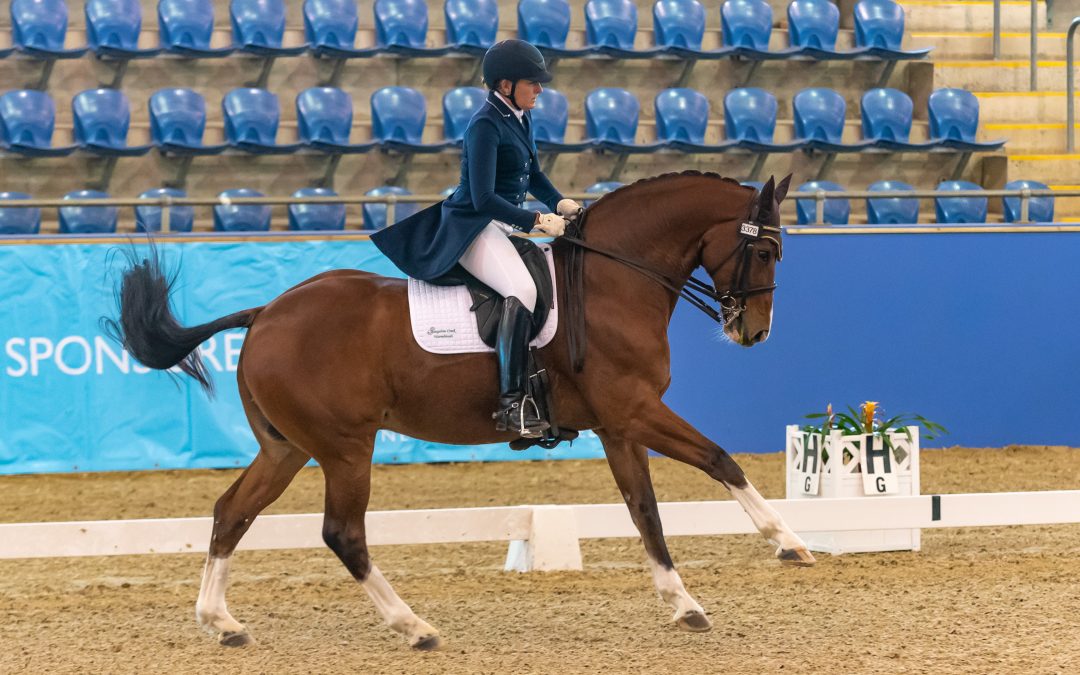 Katina Smith is one of those competitors that just keeps on popping up and keeping every competitor on their toes. She has ridden dressage since a young girl. Katina comes from a farming family who didn’t ride horses, but Katina’s grandmother did, and was insistent that Katina had a pony to ride, and so it all began. From that day on she has hardly gone a day without riding and has produced many champion horses and is always in the mix in open company. At CDI and national shows, she is always in the top few and is often in the top three at Dressage with the Stars and the young horse classes at Sydney CDI where she rides her own home bred quality young horses.  She has a great knack of interesting genetics with good rideabilty in her progeny.

Katina’s interest in breeding came when she bought the horse Richmeed Wintergold.  Jack, as he was known, was one of the first warmbloods to be competed on the Mid North Coast. Unfortunately, after a while he became seriously lethargic and was diagnosed as having a bad heart murmur.  The general opinion was that the horse would not be able to cope with the demands of being a serious competition horse. Katina bought the mare Balmoral Dreaming by Duntroon as a replacement, but she refused to give up on Wintergold, her first warmblood and very special friend. Katina worked him very carefully back to fitness and he never looked back and continued on to become a competitive FEI horse, and later a young rider horse. This was a great feat considering that Katina had never ridden past Elementary until this horse. He was a super sort and Katina adored him.

The mare was also good but Katina being married, keeping down a good position as an accountant for a train manufacturer, and with a young son, did not have the time for her training. She put her in foal to Wolkentanz and Willow was the result. Willow is a mare that has gone on and produced many great competition horses including both BC Sangria and BC Romanov who are both competing at the Nationals.

This year at the Nationals Katina has her favourite of all, he is a little laid back but ever so cute, Just Dance. He is in the small tour and he is one to reckon with as on his day he is capable of a mid 70% test. He is by Jive Magic out of a Duntroon mare and at State Championships was Elementary, Medium and Advanced Champion.  Just Dance is on his way to Grand Prix where he has tested the waters and still confirming that work. He will be a contender at small tour and this is his final hoorah at this level as he will then step up to Grand prix after this comp. He has amazing reach in the extensions and half passes and always uphill and with his flashy stockings, this bay is a crowd pleaser but even more, the stable favourite. Katina also has BC Sangria in the Advanced, along with another impressive black gelding, MW Shockwave.

BC stands for Katina’s stud prefix, Bangalow Creek, which is the little creek that runs through her property. The stud is at Coopernook near Taree and, not only has great facilities in stabling, yards and paddocks but is now supported by a wonderful indoor arena next to the picturesque outdoor. Sangria by Sandro Hit is out of the first BC bred progeny, Willow, and is a seriously impressive horse. He has been very successful in classes to Advanced. He has started competing at small tour but Katina is taking it easy with him at Nationals entered only in Advanced but tackling his second ever freestyle.  His stable mate, Shockwave is also in the Advanced class. Both are tall and black, a little hard to tell apart, so it will be an interesting head to head. Shockwave is by Swarovski from a Weltmeyer bred mare and is tall and very leggy and has been really successful as a young horse finishing in the top three in the young horse classes at the Sydney CDI. He is always in the mix and at the top of the leader board at Medium and Advanced.  This is one super star showing all the talent for small and then big tour already.

Katina lives a great country life and always mixes with the best and never shirks distance or quality shows to get in to the top of the sport…it’s her passion. A super talented rider who loves her horses and having bred most of them it adds that little more interest.  She doesn’t hesitate in loading up a truck of horses and tracking to Melbourne or Tamworth, Clarendon or Willinga Park and is always so encouraging and happy to all competitors. Her passion spreads to her coaching from novice horses through to FEI riders.  Again showing her positivity she organises dressage educational days and masterclasses at her property for all in the area. Judges come to comment, and Katina rides and demonstrates to all and sundry on the training and the riding of tests.  She is passionate and grounded and simply a great competitor who you can’t help but notice at the Nationals on her great three horses.

Katrina is now joined by a super star and raw diamond, young rider, Shania Madden. Shania found her way to Katina’s in December 2018 after spending a few years working and competing with stock horses in the area. She lives close to Katina and took to the work in the dressage barn like a duck to water. She first rode a dressage horse for Katina in January this year and so has been only riding in a dressage arena for the past 9 months. Her uncanny ability to adapt to the sport is amazing and she has an easy elastic balanced position and rides as if she was born on a dressage horse in the dressage competition scene. As a groom for Katina and around the farm, Katina describes her as “a pleasure to work with, she is conscientious and kind yet disciplined and deliberate and has a very easy nature to be around. That’s all good when you work together on and off the horse. As a student she is quick to learn and has a very natural feel and cottons on to the preparations and the movements quickly. When you think she hadn’t even ridden a Preliminary test 8 months ago and has now won the Advanced Freestyle at the recent State Championships, it is pretty amazing. She has also won at Prix St George with BC Romanov which is testament to her skills as he is great but needs careful and empathetic riding. What she has achieved already is amazing and I can’t wait to see what happens next.”

Katina was asked what it meant to be competing three horses at such level at the Nationals this year, she replied humbly:

“I have a great feeling of achievement as I have trained all of my horses since their return from the breaker through to the levels they are at today. Combined with the help of some wonderful coaches and my passion and desire to succeed, I am very happy with where I am at. I feel honored and proud to have achieved the necessary qualifications to be accepted into the Australian Dressage Championships. I used only watch and dream that one day this may come true and it has. I hope that others can see that dreams do come true and that it’s possible and you don’t need to be in the thick of it to succeed. I feel satisfied with my own achievements and so should every other competitor. Now I hope we all have great rides and get positive feedback, because we all work really hard to be here. And remember it’s supposed to be fun!”

Katina is a seriously passionate and delightful dressage enthusiast and encouraging for all who have a go.

We all wish her the best of luck.

On asking Shania what it meant for her to be competing on BC Romanov in the CDIY at the Nationals after only 9 months with dressage, she replied:

“I am so grateful to Katina for all her coaching and giving me the opportunity to ride her horse Romanov at such an event. I am so excited to be competing at such a big event and to also be able to be a part of Katina’s championships and helping her with her three horses who are a huge part of my life. I guess I come into this with eyes wide open and to suck up the experience. There is no pressure on me to do well as I am going there to simply ride, to be the best I can, and to achieve a test that we are happy with. Katina never puts pressure on herself or her horses as you can only do as well as you can and that’s all there is to it. I love her attitude and I can’t wait… It’s going to be great fun and I know whatever happens we will have done our best and will put it under our belts as a great experience and thank the horses for the opportunities.”

It will be great to watch Shania and Romanov and much credit to the mentoring of Katina.  It certainly is amazing and worth watching…Remember Shania had never ridden a dressage movement let alone competed in any test 9 months ago!