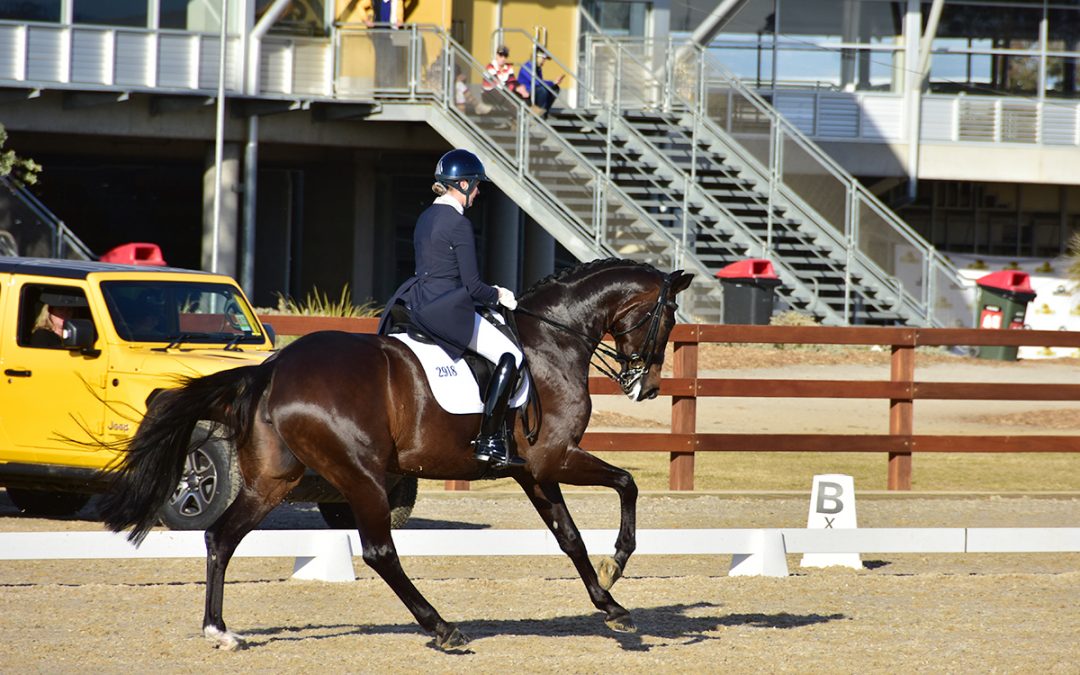 Photo Caption:  Maree Tomkinson on DMJ Donna Elena in the Grand Prix at the 2019 NSW Dressage Championships in Tamworth.

For four days in October, horses and riders from most Australian States will go head-to-head aiming to take home a National Champion Trophy and Title.

The Australian Dressage Championships will be held at the Sydney International Equestrian Centre from Thursday, 17 October through to Sunday, 20 October 2019.

Two hundred and sixty horses have entered in the event.  The maximum number that can take part at each level under EA National Dressage Rules is 35 horse/rider combinations.  Horses are ranked on their top three performances during the qualifying twelve-month period and the top 35 are accepted to compete at each level. Extensive reserve lists exist at some levels.  To make it into top rankings is an achievement in itself.

An exciting line-up of combinations will participate.  Joining NSW riders are competitors from Tasmania, Queensland, Victoria, South Australia, the ACT and Western Australia; and we welcome a New Zealand rider competing in the CDI-W.

In addition to over 30 leading judges who will be officiating from around Australia, Championship organisers are delighted to have well-known and respected FEI 5* judge from Finland,  Maria Colliander, joining the panel along with FEI accredited 4*judges Jeanne MacDonald from the USA, Helen Hughes-Keen from New Zealand and Col. Sunhil Shivdas from India.

Eighteen horses will compete in the CDI-W with an interesting mix of up-and-coming horses and more established combinations.  Riders with aspirations of competing at the Tokyo Olympics will be aiming to impress the FEI 5* Judges and gain a MER (Minimum Eligibility Requirement) score. Maree Tomkinson and DMJ Donna Elena are in fine form having won the Grand Prix at the recent NSW Dressage Championships in Tamworth.

More information on the Championships, including an acceptance list of competitors and the competition timetable, can be found on the website.